Note: I’ll occasionally pop up back on here to write stuff about the stocks that are in my mother’s portfolio (which I manage). Though I missed the latest round of earnings for all of those companies – a complete failure on my part – I do continue to keep abreast of what is happening to those companies. If you want to read the bulk of my writing these days, check out SportMuse.net (@SportMuseNet on Twitter), where I spend a lot of time writing about sports. I am also looking for freelance writing opportunities, so feel free to reach out to me on Twitter @GuruEbby if you have any available. Feel free to peruse the archives here to see what I’ve written before, or even some of my published stuff that I once got paid to write for the Motley Fool.

In news that took me by surprise, PepsiCo (NYSE: PEP) announced plans to purchase SodaStream Internation (NASDAQ: SODA) for $3.2 billion. This was quite a substantial premium on the current market price of the stock – as evidenced in the chart below (that big jump at the far right is after the announcement) – but something that seems totally in character for out-going Pepsi CEO Indra Nooyi.

Back in my earliest Motley Fool days, I wrote about my appreciation of SodaStream, primarily because of the affection that one of my friends had for the product (and stock). After submitting myself to a taste test, I was sold. I bought myself a SodaStream machine, which remains buried somewhere in my mother’s basement because it was taking up counter space when I went away to college, and even owned the stock for a while too.

Looking back, I even intended to write something about why I had chosen to invest in the company, a post that never came, and I don’t remember why or when I sold, but SodaStream kind of fell out of favor with even the investing public, with performance that had been less than stellar for most of the past five years, and based on the date of that Portfolio X-Ray intro, the SodaStream article I never wrote would have been about five years ago: 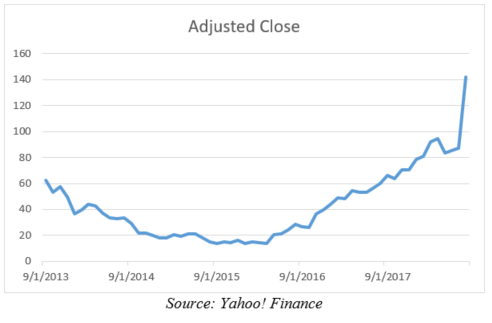 As you can see, there has been mostly a downward trend in the stock, as the company went away from being a soda replacement and pivoted towards a sparkling water company, and the uptick in that performance is directly correlated to that renewed focus.

Had SodaStream remained in the business of making similarly-flavored sodas at home (which you can still do), I don’t know if they would have attracted the attention of Indra Nooyi. PepsiCo already does soda well, and it wouldn’t have been in their best interest to buy a company that sells kits to make a knock-off version of “cola.” But Nooyi had redirected PepsiCo into a three-category business: Fun For You, Better For You and Good For You. (As an aside, if you are a fan of podcasts, the Freakonomics interview with Nooyi is definitely a good listen).

With a consumer shift away from the “Fun For You” category of goods, i.e. sugary sodas and salty snacks, Pepsi had been looking to expand the offerings in the other two categories – there’s only so much Diet Pepsi one can sell – and decided to find a company that would fit well with the “Good For You” category at the business. It will expand on PepsiCo previously launched Bubly brand, and allow PepsiCo to continue to compete within a marketplace that sees less and less soda being purchased.

As an (indirect) PepsiCo shareholder, it will be sad to see Nooyi step away from the business, especially in light of the company’s performance during her tenure. However, her parting gift, the acquisition of SodaStream, should benefit shareholders long after she is gone. While I don’t think I will be digging out my old SodaStream machine – it’d probably be better just to buy a new one at this point – I remain a fan of the product which they make and hope that PepsiCo can capitalize on the product.

Disclosure: I have purchased shares of PepsiCo on behalf of my mother and have no intentions of adding or selling shares over the next 30 days. Please read my full disclosure here.