Article: The Force Is Strong With this Retailer

My first “Fool Revisited” piece for the week is about a retailer, and I don’t know the source of the clever title and lede of the article, though as indicated in the article’s disclosure, it may have been a recent viewing of the Star Wars saga. Combined with the looming departure of founder and CEO Craig Jelinek from Costco (Nasdaq: COST), I used the tale of Obi-Wan Kenobi to paint a way forward for the warehouse retailer after a change of leadership.

I probably thought I was being pretty clever with the whole thing. In reviewing the article, it seems to be solid analysis, and the performance of the stock in the time since publication seems to bear this out. In re-looking at this article, I wanted to take a look at the three metrics I used to evaluate Costco: gross margin, CAGR, and P/E ratio. I’ve been a fan of Costco as a company since my time at the fool – and have been an investor in the past – but whether it can maintain its competitive advantage remains to be seen.

I know that you want to see it, so here is the old tweet of the article from back in the day:

New @themotleyfool: The Force Is Strong With This Retailer: But can Costco's new leader resist the power of the … http://t.co/FfyHdYmo

Instead of publishing my chart that I have done for all the previous articles in this series, I’m going to see if I can recreate the three charts contained in the article. However, the eight companies mentioned In the charts in my article have been reduced to five: Staples and BJ’s Wholesale Club have both went private, and Office Max and Office Depot have merged under the Office Depot name. Nevertheless, we can still look at the referenced metrics for the remaining five companies, with the only difference that I will examine the CAGR since article publication on October 6, 2011 instead of a 5-year number.

First up is a look at gross margin. As was the case 6+ year ago, Costco still rides membership fees to success despite low gross margins companred to the others: 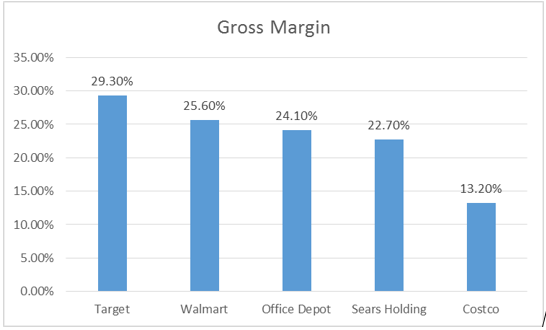 Next up, CAGR shows that Costco is still leading the way. Poor Sears Holdings (Nasdaq: SHLD) is definitely closer to closing than remaining a going concern: 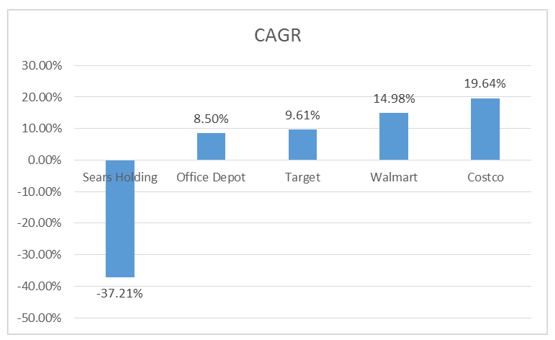 Finally, regarding P/E, Costco remains the most expensive off all the retailers featured. An investor looking for potential value based on this metric might consider Office Depot (Nasdaq: ODP), though P/E ratio should be only one factor used to decide whether to invest. Personally, I think the relative stable performance – and “cheaper” according to P/E – Target (NYSE: TGT) would probably be the most attractive option going forward of any of the five on this list: 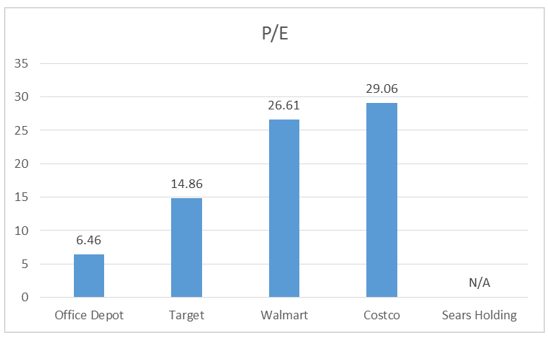 Retail is an ugly sector right now unless you can identify specialty operators that are less likely to be disrupted by Amazon.com (Nasdaq: AMZN). Does Costco’s reliance on membership fees and low margins help protect it from the creeping darkness that is Amazon taking over the world? I’m not sure, but it has served the company well over the past few years. Whether or not this continues going forward remains to be seen. I’d personally look elsewhere rather than retail right now, and I don’t see this changing anytime soon.

Disclaimer: I do not personally own shares of the companies mentioned here, though I purchased shares of Amazon on behalf of my mother in her investment account that I manage. However, I have no plans to purchase shares of any company mentioned within the next 60 days in any account in which I manage investment funds. You can read a little about my personal investment philosophy here.